What is Web Accessibility and Why is it Important? 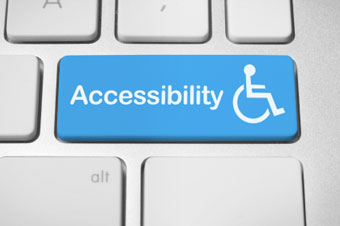 The answer is fairly simple, actually.  “Web accessibility” refers to the idea and practice of making websites usable by as many people as possible, regardless of their web-surfing knowledge and other abilities.  For a business web site, this is academic—of course you want to reach as many users as possible.  Web promotion is one half of the equation—web accessibility standards represent the other.

So what can keep users from accessing your website the way you intend it?  Imagine that a user is color blind, and the only indication of your linked anchor text is a change in color.  You can combat this by underlining or italicizing the links in your body of text.  Now imagine that a user either cannot use a mouse well, or at all.  For those with limited access to the device, you can make the links as large as possible while still being aesthetically pleasing.  However, you will also have to consider how those with keyboard-only access can navigate your site.

Web accessibility touches not only those affected by “impairments,” whether visual, motor, auditory, cognitive, or otherwise, but also all users in general.  The Web Content Accessibility Guidelines, published by the Web Accessibility Initiative of the World Wide Web Consortium, set out standards for making sites accessible to different users and different devices (web users browsing on mobile phones have become a highly-sought market).  The first edition was published in 1999 as a W3C recommendation, and had three priority levels:

Priority 1: Web developers must satisfy these requirements, otherwise it will be impossible for one or more groups to access the Web content. Conformance to this level is described as A.

Priority 2: Web developers should satisfy these requirements, otherwise some groups will find it difficult to access the Web content. Conformance to this level is described as AA or Double-A.

Priority 3: Web developers may satisfy these requirements, in order to make it easier for some groups to access the Web content. Conformance to this level is described as AAA or Triple-A.

In 2008, the WCAG 2.0 was published, redefining the levels of conformance from the previous edition and maintaining a list of issues as designers switch from the old standard to the new one.

“Web interoperability” is a related subject.  This term refers to the standards that make websites accessible on different browsers and devices.  The elements involved with optimizing web interoperability can be highly technical, involving use of XHTML, CSS-based layouts, DOM-scripting, and more.  If you’re not familiar with these terms, consider networking with a web design professional.  You can find numerous designers in your area with a simple search.  If their website looks like one you would want for your business, contact them, and chances are you’ll be able to work something out.